I'm so excited to introduce a new feature on Fictiffous! Please welcome my first guest blogger, author ST Bende, who's here as part of a blog tour for her upcoming release, ELSKER (book one of the New Adult paranormal romance series, THE ELSKER SAGA, releasing this May from Entranced Publishing). Read and reward yourself--there's a giveaway at the end! But first, a little primer...

This is a question that writers, agents, and publishers alike are struggling to answer right now, being that the genre is so new (I'm talking like newborn baby new, as in almost no one had heard of it just a few months back). So far no one can provide a definitive definition of the genre. There's a widespread misconception that New Adult is just Young Adult with some Romance-quality smut or even straight-up erotica thrown in. But NA is more than just sexy YA. The NA label is more accurately used for older YA, or for crossover novels that don't fit neatly in either the YA or Adult categories. But that's not quite the right definition either. At least not a complete one.

Personally, I think of NA as college fiction, or stories about people who are past the wide-eyed-doe stage of high school, but aren't quite independent, fully mature adults yet. These are stories of people finding themselves, exploring human nature, falling in love, all outside the confines of parental abodes and grade school limitations. It's an exciting new separation of genre that's hot--and thus controversial--in today's publishing market.

A little blurb about the book:


Kristia Tostenson prefers Earl Grey to Grey Goose and book clubs to nightclubs, but when she transfers from her one-stoplight town to Cardiff University in Wales she falls in love with Ull Myhr. Her new boyfriend isn’t exactly what she was expecting. He’s an honest-to-goodness Norse God — an immortal assassin fated to die at Ragnarok, the battle destined to destroy Asgard and Earth. Kristia’s crazy visions are the only thing that can save their realms. Her orderly life just got very messy.

Check out the book trailer on YouTube and the cover posted below! 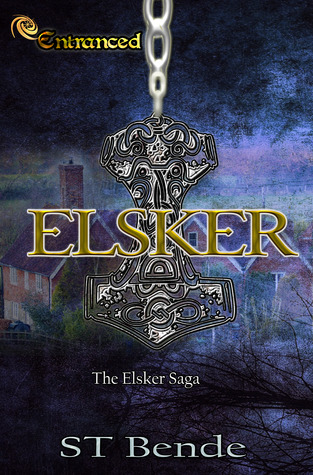 Thanks so much for letting me visit today.  As a debut author, it’s been fantastic to be embraced by such a lovely group of bloggers.  Y’all have made me feel so welcome!

ELSKER, Book One in THE ELSKER SAGA, follows twenty-year-old Kristia Tostenson as she leaves her small town to find adventure at Cardiff University in Wales.  Kristia gets a lot more than she bargained for when she falls in love with Ull Myhr.  He’s not just a graduate student - he’s an Asgardian Assassin and the Norse God of Winter.  Kristia’s orderly life is about to get seriously complicated.

1. Elsker exists because of a cup of coffee.  I was on a road trip along the Oregon coast when a hankering for caffeine led to a drive-thru coffee hut.  The town was tiny (only 250 people and one flashing stoplight) and the setting was pristine (think forest and river and ocean).  When the cheerful college-aged barista handed me my drink, I wondered what her life was like in Nehalem.  I snapped a picture of the coffee-hut before I left, and I’m so glad I did.  That was the moment Elsker was born.

2. I never meant for anyone to read Elsker.  After seeing Nehalem, I started writing a little story in my journal about a girl from the tiny town, falling in love with the Norse God of Winter.  I wrote it for fun, just for myself.  It was never meant to leave my journal.  But every day I wrote a little more, until my little journal story grew into a book.  And I was so in love with Kristia and Ull, I thought other people might fall in love with them too.

3. Elsker got its name from a song.  When I decided to query Elsker, I realized it needed a name.  This must have happened around Syttende Mai -- Norway’s independence day -- because somewhere in the endless refrains of Ja Vi Elsker Dette Landet (the Norwegian national anthem, Yes, we love this land), I thought it sounded like a pretty darned good title for a story about Norse mythology.  But of course, that title was much too long, and since I already had a character named Elsker in the book, that became my title: ELSKER.

4. I’ve used Inga to shamelessly exploit my own love of IndyCar.  I’m sure all authors put pieces of themselves into their characters, and Inga got my love of IndyCar racing.  She’s one of Ull’s best friends, and a pretty awesome goddess in her own right.  And she loves IndyCar.  Her favorite drivers are Helio Castroneves and Ryan Hunter-Reay, who may or may not be my favorites too.

5. There is a real Olaug, and she’s amazing.  Over the years, the real Olaug has become a grandmother to me, much like Elsker’s Olaug is a grandmother to Ull.  My Olaug has spent the better part of a decade attempting to teach me Norwegian.  She is one of the bravest, most adventurous, and inspiring people I know.  And she introduced me to Norsk Waffles, a delicacy I love so much, it has a bit role in Elsker.  I’ve included my favorite Norsk Waffle recipe at the end of the book, and I hope you fall in love with it too!

ST Bende was kind enough to send over an excerpt for her blog tour readers! You can read it below.

At eight o’clock, a firm knock interrupted my reading. I picked my way through the flower shop that our living room had become and opened the door.

“Oh good, you kept my peace offerings.” Ull treated me to a rakish grin.

“Why?” I challenged. Ull sighed.

“Are you going to fight me at every turn?”

“Please come.” He looked so adorable standing on my stoop, his scarf casually thrown across the grey sweater under his coat. I gave in quicker than I meant to.

“Fine.” I grabbed my coat from the closet by the door and shoved my keys and wallet into the pocket. “Where are we off to?” I closed the door behind me and followed Ull into the brisk night, waiting for his promised explanation.

But he didn’t say anything. Instead, he put his hand on the small of my back and guided me away from campus. I shivered and noticed that Ull wore his jacket open, at ease in the chill. As we rounded the corner, Ull dropped his hand to clasp mine. It was so warm, so strong, and for a moment I forgot to be mad at him. We walked in silence as he led me down the main road. After two right turns, I found myself standing in a quiet garden.

Ull had brought me to a church.

THE ELSKER SAGA is available now at Goodreads and at Entranced Publishing. TUR, the prequel, can be downloaded for free here. Amazon and Barnes & Noble buy links will be available starting April 22.

Before finding domestic bliss in suburbia, ST Bende lived in Manhattan Beach (became overly fond of Peet’s Coffee) and Europe… where she became overly fond of the musical Cats. Her love of Scandinavian culture and a very patient Norwegian teacher inspired The Elsker Saga. She hopes her characters make you smile and that one day pastries will be considered a health food.
You can follow ST Bende by sending an e-mail to stbende(at)gmail(dot)com, or at any of her social media links listed below.

And a Giveaway Too???

Thanks for reading my first blog tour guest post! We hope it's inspired you to check out ELSKER and other new releases in the New Adult genre. And as a special thanks from ST Bende and Entranced Publishing, be sure to stop by the author's blog between April 11th and May 20th to enter to win fabulous prizes in the ELSKER Release Month of Giveaways!

What do you think of the book's premise? Will you be adding ELSKER to your Goodreads TBR shelf?

P.S. The next blog tour guest post is coming in just a few weeks, so stay tuned!
Posted by Unknown at 3:00 AM