It's finally here...the sequel to Elsker! 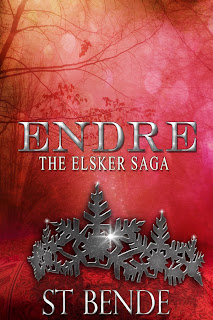 Sometimes, finding your destiny means doing the exact opposite of what The Fates have planned.
Winning the heart of an immortal assassin was a dream come true for Kristia Tostenson. Now she’s knee deep in wedding plans, goddess lessons, and stolen kisses. But her decision to become immortal could end in heartbreak -- not only for Kristia, but for the god who loves her. Because while Ull would do anything to protect his bride, even the God of Winter is powerless against the Norse apocalypse. Ragnarok is coming. And the gods aren’t even close to ready.


Watch the book trailer and then buy at Amazon or Barnes & Noble!

“If you're looking for a different take on New Adult that has plenty of swoon-worthy moments, some nail-biting action, and a mythological world you can lose yourself in, this book is for you.”

“What do you want to know?” Ull lowered his sunglasses lazily and eyed me with a look that made my insides burn.
“Well,” I paused. “Uh… what am I supposed to do if I’m attacked?”
“You mean if this happened?” Ull launched himself off the chaise, wrapping one arm around my waist and dragging me across the beach. He cradled me in his arms and landed in the froth where the ocean met the shore.
“See? I’m totally defenseless?” I gazed up at him, my back pressed firmly against the wet sand. He hovered over me, supporting his weight on his forearms.
“I am afraid you are.” Piercing blue eyes locked in on mine. Between the depth of his stare and the heat from his abs, I forgot everything else.
“Um …” I bit my bottom lip.
Ull tilted his head to one side, a small smile playing at one corner of his mouth. “Now what did you want to know?”
“I--” I broke off as a wave washed over us. The warm saltwater lapped up to my waist then retreated, leaving a film of sand over my legs.
“You were asking me how to defend yourself?” Dangit, it was hard to focus with Ull’s dripping body pressing against mine. Yes, I wanted whatever it was I’d asked about. Self-defense, right. But there was something else I wanted more.
I bent my knee and twined my calf around Ull’s. I shifted my hips just an inch and stared into those endless blue eyes. They sparkled in the sunlight. My arms were trapped beneath his torso, so I turned my palms upward to touch the spot where his chest met his shoulders. It was so smooth, so firm, and so very, very warm. My eyes never left his as I moved my thumb along the line of his shoulder, down his biceps and down to the crook of his arm. I drew a slow circle inside his elbow and Ull blinked.
“Kristia,” he whispered.
“Yes?” I tried to reach up to stroke the stubble lining his square chin, but my arms were pinned.
“You are not trying to defend yourself.”
“So?” I raised my head and kissed his jaw. “Maybe I don’t feel like fighting you off.”
“Mmm,” Ull closed his eyes as I kissed my way up to his ear. “So if someone came after you, you would just let them do this?”
He swiftly rolled onto his back, forcing me on top of him. He shoved his fingers in my hair and tugged gently, pulling my head back. He kept the other hand just above the bottom of my bikini, firmly pressing my hips into his. I squirmed against the hold, trying to find a way out of his grip. Though I tactically had the upper hand, I couldn’t move.
“Well I wouldn’t let just anyone do this.”
“I should hope not,” he growled softly. He raked his teeth along my throat and paused at the hollow of my neck. “Because this could end very badly for you.” He ran his tongue along my collarbone. I shivered.
In a lightning-quick move, Ull flipped me onto my back and pinned my arms above my head with one hand. I gazed adoringly at the fierce assassin glowering over me. “And this. What would you do if someone did this to you?”
“Uh,” I blinked. If I told Ull what I really wanted to do right now, I’d turn every possible shade of crimson.
“Focus Kristia.” Ull stared at me. “What would you do if you were trapped?”
“I… uh… I’d,” I blushed. “You seriously want me to fight you off?”
“If you are so bent on going through with this little exercise, then yes. Give it your best shot. And then I believe, you promised to pay me for the lesson.”
“Gladly.” I narrowed my eyes and wrenched my arm as hard as I could. It didn’t budge. I tried again but it was futile.
“You are outmaneuvered and I am twice your weight. Try something else.” Ull commanded.
I threw my shoulder into his chest and tried to roll to one side.
“You cannot out-force me. Look at the difference in our masses. Think tactically, Kristia. What can you do that will debilitate me?”
My eyes widened. “You don’t want me to--”
“I want you to find a way to get me off you. Do what you have to do.”
I closed my eyes and raised a knee to his groin. Ull groaned and rolled off me.
“I’m so sorry! You said to--”
He raised a hand and waved at me, turning away.
“I’m sorry,” I repeated.
“That was good.” He rolled back with a grimace. “But if someone is bent on capturing you, they will come back for more. And quickly. Your next step should be to run.”
“If you want I can get some ice for--”
“Run, darling.” It was a threat. “Now.”

Before finding domestic bliss in suburbia, ST Bende lived in Manhattan Beach (became overly fond of Peet’s Coffee) and Europe… where she became overly fond of McVities cookies. Her love of Scandinavian culture and a very patient Norwegian teacher inspired the books of The Elsker Saga (TUR, ELSKER and ENDRE). She is an audio co-host of #NALitChat, and helps compile indie new releases for the USA Today HEA blog. She hopes her characters make you smile and that one day, pastries will be considered a health food.

Find ST on Twitter, her blog, or send her an e-mail. While you’re at it, introduce yourself to @UllMyhr -- when he’s not saving the cosmos from dark elves, he loves meeting new friends. Especially the human kind.

And of course, there's a giveaway! Enter here for a chance to win a gift card, bookmarks, and a copy of the book.

Hope you enjoy, and good luck to all!