Back After Baby! And Other Thoughts on Naming

My daughter Charlotte will be exactly two weeks old in a couple hours. And just because it's so dang cute, here's a pic of all my kiddos together two days after we brought Charlotte home from the hospital: 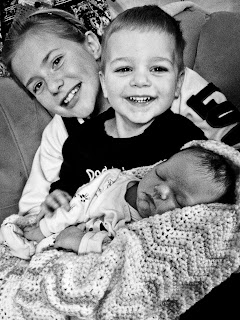 As you can see, they are all beautiful and perfect and healthy. :)

So now it's time to get back to work, which means getting back on the blog. There's no such thing as maternity leave for mothers who work from home and take care of their kids full-time. But I love my kids and I love my job, so I wouldn't have it any other way. (I'm actually typing this right now with one hand so that I can feed Charlotte with the other. Parenting is all about multi-tasking, IMHO.)

Several people have asked where we got the name Charlotte. Many assume it's from E.B. White's Charlotte's Web. And although I love that book and the spidery namesake character, that's not where we got the name. I mostly fell in love with it through watching endless reruns of Sex & the City with my college roommates ten years ago. SATC's Charlotte is so pretty and classy and put-together, and the name is classic, not trendy. People won't hear her name in the future and automatically think, That's so 2013.

Naming is important when it comes to fictional characters too. Each time you set out to name a character, you have to think about what connotations that name brings up. My name (Tiffany) conjures up images of Valley girls in the 80s. Growing up, my brother went by Bubba, a name that now makes people think of crooked-toothed rednecks. Names like Harry and Hermione, Bella and Edward, or Katniss and Peeta will remind people of their famous fictional forebears, and will thus likely never again be valid choices for mainstream fictional characters in the future.

When I was eight, I bought a baby name book at the grocery store that contained only 6,000 names. I got some funny looks, but I used that book to name my characters until its pages were yellow and crinkled. And then I replaced it with a 35,000-name book, which I still use to this day. But for today's more technology-oriented writers, there are some great resources online, including a random name generator and a tool for researching etiology.

A name gives others an idea about a person's personality even before they meet, so be sure to think about both the negative and positive connotations of a name before you give it to a character (or to your kid). It's my hope that Charlotte's name will incite preconceived notions of beauty, sophistication, intelligence, and kindness--all traits that I hope my daughter will have in spades.

What ideas do you want formed about your character? Be sure to take them into account before you start to write.